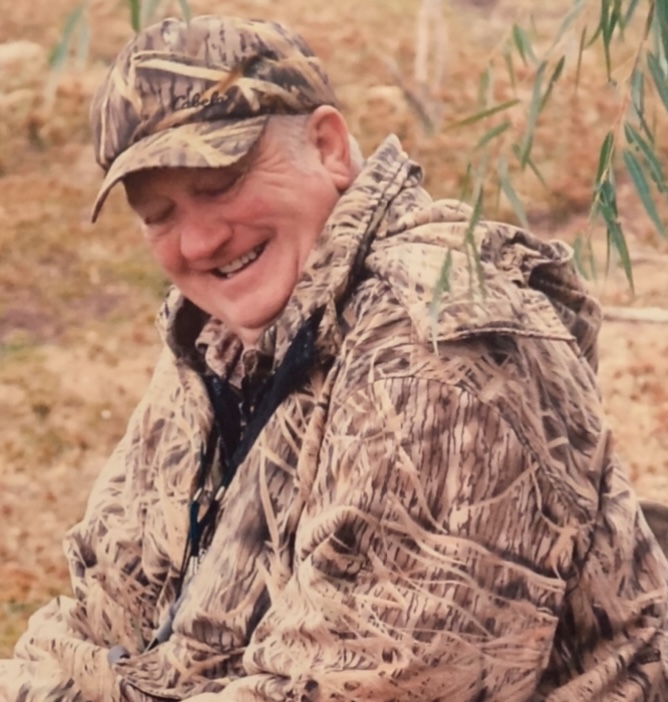 Thomas Gene Peters, known by family as “Pappy” and by his many friends as Tom (and self-proclaimed as “The Legend” or “Tom-the-Truth Peters”) passed away at home on his ranch in Walnut Springs, surrounded by his family and in the arms of his wife, Ramona, on December 12, 2020. Tom was 81 years old, born September 15, 1939, in Tulsa, Oklahoma.  He was the second of three sons born to Thomas Ray and Nadine Peters of Alsuma, Oklahoma.  Tom, along with his brothers, attended Union Public Schools, graduating in 1958.  He played football, basketball, and baseball, and his love of sports would become his future profession—along with duck hunting!

In the summer of 1958 Tom headed to Southern California to work with a lifelong friend for the U.S. Forest Service.  He was on the Dalton Hot Shot Unit, an elite front line firefighting crew.  That fall he attended Oklahoma State University, and then in 1959 he moved to Conners State College in Warner, Oklahoma where he played quarterback and defensive back for the football team.  From there he transferred to North Eastern State University in Tahlequah, Oklahoma where he played college baseball through 1961.  He completed his Bachelors Degree in 1962 and finished his Masters Degree in 1966.

Tom married the love of his life, Ramona Kirkpatrick and her daughter Renee on August 6, 1966. Because he was pursuing his dream of being a coach, he encouraged Ramona to get her teaching degree so they would be able to work together.  They began their careers as teachers in Roswell, New Mexico, then to Sour Lake, Texas, then to Meridian, Texas, and finally to Granbury, Texas.  Tom was a beloved coach everywhere he went and was affectionately known as Coach Peters.

Tom and his wife stopped teaching in the late 70’s and entered the greenhouse business.  Over the next 20 years they became the 5th largest producer of bedding plants and poinsettias in the state of Texas, serving all of the metropolitan areas of the state, along with Oklahoma and Louisiana.  They sold their successful business to a corporation out of California and entered the financial profession, purchasing a local bank.  They later sold the bank and retired to their spacious ranch where he lived out the rest of his years as a cattle rancher and raising game deer.

Tom had a larger-than-life personality and lit up every gathering with his sports stories, funny jokes and his signature melodic whistling.  He never met a stranger and was an excellent husband, father, grandfather and great grandfather, as well as a friend to so many.  He was an avid sportsman his whole life, enjoying duck hunting in Canada and his favorite Texas location, the “Duck Club” in Lawn, Texas.  He loved turkey hunting and hosted many fishing tournaments on his private lake at the ranch.  But if you asked Tom what his most important accomplishment of his life was, he would tell you without hesitation, it was his family.  He adored his wife, daughter, 3 grandchildren and 7 great grandchildren.  He proudly followed and attended their various sporting events, school activities, drama productions, FFA animal shows—whatever they were doing, he and Mona were there cheering them on.  He gave his life to his Lord and Savior Jesus Christ at the age of 62 and served faithfully at Mambrino Baptist Church.  He loved the Lord with all his heart, mind, and soul and was one of the most thankful followers of Christ we know.

Tom is preceded in death by his parents, Thomas Ray and Nadine Peters and his older brother, Robert R. Peters Sr. (“Buzz”).  They died 16 days apart and stormed heaven’s gates together.  Their faith is now sight.

Left to cherish his memories are his younger brother, Ron Peters of Pryor, Oklahoma, his wife Ramona, and their daughter Renee Wilson and husband Glenn.  He is also survived by his granddaughter Chelsea Chambers and husband Heath, along with their five children, Braislee, Cambree, Landon, Emmee, and Vivee.  Also, another granddaughter, Cassi Frazee and husband Matthew, along with their two children Cadence and Landry. And finally his only grandson, Chayce Wilson and wife Hannah.  He also leaves behind numerous other family members and friends.

Arrangements will be made by Lawson Funeral Home in Meridian, Texas. Viewing will be at the home of Tom and Ramona Peters at the 3P Ranch on Saturday, December 19th from 4:00-8:00 p.m., and Sunday from 2:00-5:00 p.m. Tom will then be cremated, followed by a celebration of his life on Wednesday, December 23rd at 3:00 p.m., to be held on their ranch at Lake Tomona where Tom was baptized.